***Updated to include boat accident data from 2016

Minnesota is known as the land of 10,000 lakes for a reason (technically it has 11,842), and Minnesota residents love their boats. Despite a short boating season in the state of Minnesota, there were 808,627 registered boats in Minnesota in 2015 – the 2nd most of any state in the U.S behind only Florida.

States with the Most Registered Boats

However, boating is not all fun and games.  As with any popular activity, boating certainly does not come without risks. Boating accidents are on the rise in Minnesota, and many of them lead to serious injury and death.

2015 was one of the worst years that Minnesota has seen on the water in quite some time and things did not get better in 2016. In fact, 17 people lost their lives in recreational boating accidents in 2016, just one less than the ten year high of 18 in 2015 (and equal if you count the one fatality that occurred during a motorboat ‘lake test’ in 2016). 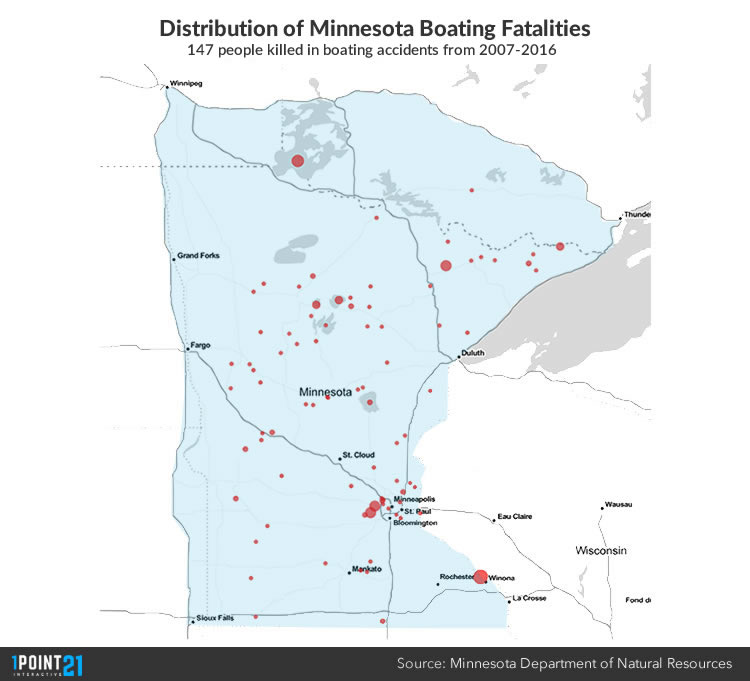 Of the 17 deaths in 2016, 15 victims were reported as not wearing a life jacket, and drowned as a result. The importance of a wearing a life jacket at all times cannot be overstated, as you never know when an event may occur that will cause you to enter the water.  From 2006 – 2017, 49 people drown after their boat capsized and another 30 drowned after falling in the water.  However, the risk of drowning is present even when you know you are going in –  in the same time frame 8 people drowned after jumping in, 7 of those to go swimming.

While even one fatality is too many, Minnesota’s boating accident numbers compare favorably to the rest of the United States. Nationally, boating accidents caused 626 deaths with a fatality rate of 5.28 per 100,000 per registered boats in 2015.  Conversely the fatality rate was 2.23 per 100,000 registered boats in Minnesota, less than half the national average. This disparity could be, in part, attributed to a renewed emphasis on water recreation safety and education by the state of Minnesota’s Department of Natural Resources.

Breaking it down by month, July is far and away the most accident prone month, with approximately one-third of all accidents taking place during this time, likely due to Fourth of July celebrations. Incidentally, alcohol was a factor in 17 percent of boating accidents. Nationally, alcohol is the leading contributing factor to fatal accidents, followed by hazardous waters and operator inattention.

Minnesota has roughly 808,000 registered boats on the water, and not all boats even have to be registered; exceptions are made for non-motorized boats ten feet or less in length, duckboats during duck-hunting season, and rice boats during harvest season and seaplanes. With all of those boats, it’s obviously of very high importance that everyone be as safe as possible when operating them.

Minnesota has 72 pages worth of things to know while on the water in their boating guide this year. These are not separate of any national boating regulations, but rather in addition to them. New boating laws for 2016 say that:

Many laws govern the safety of not only you and others around you, but the wildlife within the waters in which you are boating.

A lot of this comes down to just being aware of your surroundings. You are not allowed to operate a boat in an area legally marked off for swimming, or within 150 feet of a diver’s warning flag. It’s against the law to chase wildlife or venture into breeding grounds, tamper with navigational aids, attach your watercraft to a buoy or intentionally obstruct a seaplane. When it comes to your engine and the sanitation of your boat, there are a lot of laws here as well.

Zebra mussels are a huge problem in lakes. It’s required by law to clean your boat before leaving water access property, drain all water related equipment and dispose of any unwanted bait or other refuse. Before bringing your boat into the water again, it should be dried for at least five days and sprayed with high-pressure or 120°F water for at least two minutes. The transportation of zebra mussels and/or other invasive species from one body of water to another causes great damage to its ecosystem.

Carbon monoxide is a toxic gas that has no color, odor, or taste, making it almost impossible to discover unless the source is identified. Last October, 7-year-old Sophia Baechler died of carbon monoxide poisoning when the gas leaked out of a hole in the boat’s exhaust pipe while out on Lake Minnetonka. Because of this, Minnesota law makers passed Sophia’s Law in April which mandates that motorboats with an enclosed accommodation compartment must have a functioning detector system installed as of May 1 of this year. This law makes Minnesota the first state to require carbon monoxide detectors in motorboats. Boats affected by this law should already be receiving warning stickers that detail the new requirements but for more information on this law change and ways you can keep you and your family safe, please visit the Minnesota Department of Natural Resources Sophia’s Law page.

Who is Liable in a Boating Accident?

In the event of a serious boating accident, both the owner and operator of a watercraft are jointly and severally liable for any injury or damage caused by negligent operation of a watercraft. This is the case whether the negligent action is a violation of state law or simple neglecting to observe ordinary care as common law requires.

However, the owner is not liable if the boat or watercraft was being operated without the his or her express or implied consent. Consent is presumed if the watercraft is under the control of the owner’s spouse, father, mother, brother, sister, son, daughter, or other member of the owner’s immediate family.

As previously mentioned, 60 percent of those who died in a boating accident in 2015 were not wearing a life jacket. We’ve mentioned some of what’s required by law when it comes to life jackets, but there are many situations which one thinks they might not need one, but actually do:

Sometimes you can be as responsible as possible and still find yourself in an accident. It’s why that word is used. If it does happen, it’s important to know the proper protocol and necessary steps to take, especially if someone’s life depends on it.

What Are Minnesota Boating Safety Rules?

That awareness factor is key to avoid causing damage to your or someone else’s boat. One thing that could help is proper installment and use of boating lights, obviously important if you are on your boat at night. Nationally in 2015, 27 percent of 4,158 boating accidents happened at night or around dawn/dusk, when visibility may have been an issue. There are many rules here that all boaters need to abide by:

It’s not just the lights that need to be in working order; a boat requires continuous maintenance and safety checks every time before you take it out on the water. Are there enough life vests for everyone, do they all fit properly and are they all at an immediately available distance, including the throwable one? Being prepared – having something and not needing it rather than needing it and not having it – can be the difference between life and death.

Minnesota says Stay Alert, Stay Alive in their handy boating brochure, and their five tips for doing this are: wear your life jacket, stay sober, tell a friend where you’re going, keep an eye on the weather and, in their words, “get a clue.” This means that you should understand your boat; know what it can and can’t do. When you are in the boat, stay low and seated, so that if you hit a choppy wave you don’t fall overboard. Also, it recommends you take a boating safety course.

Do I Need a License to Operate a Boat in Minnesota?

The requirements here vary based on your age. You must be at least 12 years of age to even be able to operate a boat, and you cannot do so without supervision of some sort until you are 17 years old. To get a Watercraft Operator’s Permit (WOP), you have to take an online course in order to show that you have the knowledge and capability to handle a boat.

If between 12-17, there are still restrictions based on the horsepower of the vessel. If 12-13, you must have someone older than 21 on the boat regardless of the horsepower. If between 14-17 you can:

The rules are slightly different for a Personal Watercraft, such as a jet ski. If you are less than 13 you can’t operate even with an adult on board. If you are 13 you must ride with someone who is at least 21, and if you are 14-17 you can operate by yourself as long as you have a WOP. It’s crucial that you take a safety course as well, no matter your age, especially if you are new to boat ownership and/or operation.

In order to register a new boat, you must do so in person unless it’s longer than 16 feet, in which case the dealer will apply for title and registration on your behalf. You must know the boat’s length, manufacturer, type of hull material (wood, metal, or plastic), type of propulsion, model, year, serial or hull identification number (HIN) and have a sales receipt that shows you have paid the sales tax. Registration is good for three years, and it can be renewed online.

Much like being negligent in a car accident or being ticketed with a DUI, you can be fined and charged with the same while operating a boat. The penalties for a BWI (boating while impaired) include but is not limited to a revocation of boating privileges for up to 90 days, as much as $1,000 in fines and even possible jail time. If you happen to cause injuries or have a BAC of .16 or above while operating a boat, the penalties can be even more severe. The consequences of being irresponsible are just too great.  Other “rules of the road” include:

Many of the same rules which govern cars can clearly be applied toward boats, but there are many laws governing the waters with which all boaters should be aware and familiar.

What Should I Do If I’ve Been In A Boating Accident?

If you do get in an accident on the water, first assess everyone’s health; did anyone hit themselves on anything or fall overboard? The safety of all passengers is much more important than any property damage, no matter how the accident may have occurred. These are things you should do immediately after an accident:

Reporting accidents to the state authority is federal law if any of the above conditions are true, and should be done within 48 hours for a fatal accident, and within 10 days for an injury or damaging accident. This is necessary not only for keeping accurate information, but for state authorities to continue to make adjustments to laws and safety requirements in order to make the waters more enjoyable.

If you have been in accident, then filed a claim and report as described above, there may be potential for a personal injury lawsuit the same as there could be with a car accident. If you need legal representation, Knutson & Casey have the experience, expertise and dedication to handle every aspect of your suit and ensure that you are fairly compensated.

Please confirm deletion. There is no undo!